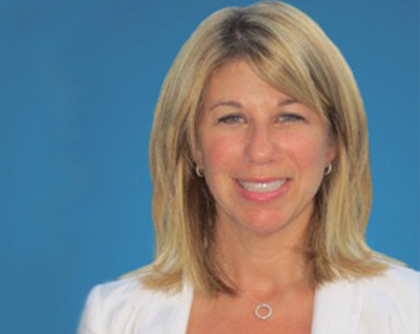 I was looking for a job about 7-8 years ago, and I was searching through traditional sources until someone suggested I see a counsellor at Ometz. I met with Cathy Grundman and we talked about my skills—I have a background in Marketing. I mentioned I was doing a lot of volunteering for the Jewish schools and synagogue, and I really love doing this type of work, so she asked if I ever thought about working in the community. I never thought of it! But just the idea sparked a relationship with Cathy and led me into a whole new area of possibilities. It was truly the light bulb moment that I needed. I thought I would end up in Marketing or maybe Development, but working as a Jewish community professional was never a door that I had considered. I don’t know if I would’ve ever come to this realization by myself.
I talked to Cathy about the different projects I had worked on, and she helped me to understand that the skills I acquired in my various volunteer activities were marketable and could be parlayed into a position. All of the planning and programing were skills that I could use in various different types of jobs. I was passionate about the Jewish community and Jewish education, so I started interviewing for different types of jobs in the Jewish community which led me to the West Island Community Center. The position was for “Coordinator for Jewish Outreach”. It was a new position and the focus was to do outreach to unaffiliated families in the West Island. I got the job and held this position for 2 years.

When I was ready to move on, I had seen a posting for another position which was for Executive Director of a Reconstructionist synagogue in Montreal, so again I reached out to Cathy who was able to counsel me in preparing to apply. I felt like I needed her guidance because it was a big promotion and a big step up from my previous job, but I thought that my newly acquired skills allowed me to apply. I was then successful in being named the Executive Director of the organization, so I was there for about 4 years.

Most recently, last spring, I started to feel like I was ready to make another move, and Cathy and I discussed different options. I just recently started a new position at Shaar Hashomayim, and I’m really excited about it. So really, Ometz has been able to help me in my past 3 jobs.
Cathy has just been a really great resource and we’ve developed a nice relationship over the years. She was always very responsive and helpful and supportive. It’s not a comfortable time when you’re looking for a job, but I felt at ease with Cathy because she always handled my file with utmost discretion. She’s always had a positive attitude, and she’s been a delight.
Whenever I hear somebody who says they’re looking to make a change, my answer is always “well, why don’t you call someone at Ometz?” The counsellors at Ometz are people who have expertise in these areas. It’s the first logical step in networking and using resources. It will continue to be a resource to help people achieve their potential. There’s additional pressure on Ometz, when nowadays people are looking to switch around their jobs a couple times throughout their lives and it’s important for the counsellors to remain responsive in helping introduce people to new opportunities. Luckily they have helped me in this aspect, so I am confident in their ability to remain contemporary.